More than just a family 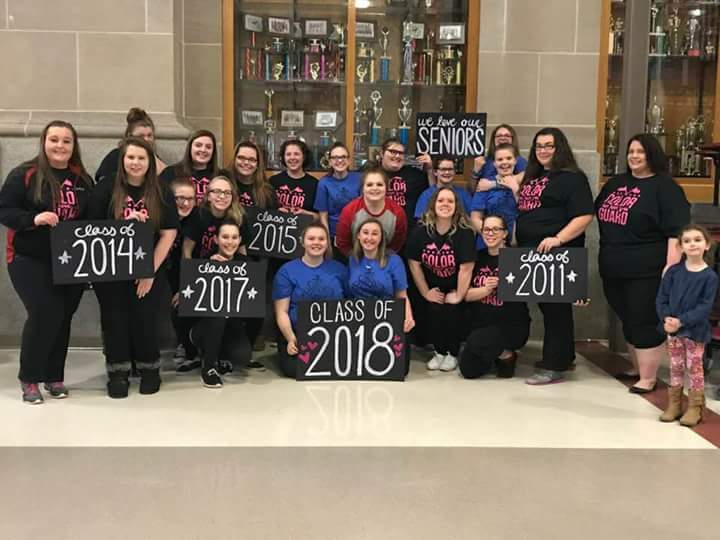 “5, 6, 7, 8” is the most repeated sentence in color guard. Whether it’s between warm-ups or the routines, this sequence helps the team look like one but still stick out compared to the dance and cheer leading teams.

“Color guard is a sport. It’s flag, rifle, and sabre spinning mixed with marching and dancing. You don’t need dance experience, just a positive attitude and a will to learn,” senior captain Tatum Hochmuth said.

“I was scared. I was nervous that I couldn’t do it and that I wouldn’t make friends. Now I have become friends with everyone and I realized that I can do it no matter what,” Hochmuth said.

The first thing someone will learn in color guard is footing. The footing is similar to ballet. Then they will learn how to use the equipment. There are three pieces of equipment that can be spun, tossed, and many other things: instrument number one, a flag. Flags are used by everyone on color guard they are the first thing someone learns to use after being taught how to move their feet. Next is the rifle. After being taught flags a person learns rifles. Most people with the rifles have been on the team for a while. Last but not least is the sabre (pronounced say-ber) they are rarely used because they are similar to rifles but harder to learn.

“I love color guard simply because it’s a fun activity. It’s a great feeling of accomplishment once you learn new skills and advance on the equipment. It’s also great watching students evolve on the team, and the sense of pride once they recognize their improvement. I’ve also made my closest friends while I was on the team…It just feels like a big family, “alumni and coach Madi Williams said.

Once you join the color guard family you see each other a lot. There are many practices especially in November leading up to ISDTA State, the biggest competition that East Color Guard performs in. Practices are very serious and consist of lots of hard work.

“Practice usually starts with stretching and a warm-up with the flags and rifles. Then, if there’s new work to learn, the team learns choreography for whatever performance is coming up. For the fall, they learn new choreography for every home football game halftime. For our winter season, they learn one performance for our biggest event of the year: ISDTA State competition. Once the choreography is taught, we run through the performance as many times as possible to clean the work up and make any necessary adjustments, “Williams said.

Try outs are April 23-26 during that time the girls who are already in color guard will be doing workshops to help the girls learn. During those three days we will work on skills and drills to build trust and show the potential new members what it’s like to be in color guard.

“I feel the expectations are high and not a lot of girls meet them unfortunately. As a member you should hold yourself high because you are the face of the school. And some choices are not very well thought out,” Hochmuth said.

As a school sport team, the color guard is the face of the school. East high’s color guard has had ups and downs there have been a couple times where it has been disbanded in some other schools. Being the face of East High is not easy. Color guard girls are expected to do their best but also have fun.

“The expectations for the color guard are just like any other team: have good character, show up, commit to the team, and always put your best effort into the work,” Williams said.

Color guard performs at many times throughout the year. During the winter it becomes winter guard and the practices become focused on ISDTA state, learning and perfecting the routine which is planned by the coach. Winter guard is November and December this year state was on December 1 for East High color guard and steppers.

“Routines start with the counts; once I figure out how many counts are in the music I usually move on to writing drill spots for the show. It isn’t until after that foundation is laid out that I start to write the choreography. It’s important to keep in mind the general effect you want the show to have; the highs and lows in the music, the theme, and the different levels of skill the team has, “Williams said.

After the routine is planned the coach Williams starts to teach the routine slowly first the flag work which takes a couple days-weeks, then they move to learning the flag work to the music. Practices are long and very often.

“There aren’t necessarily any “rules” for guard. At competition it’s all about the judge, it’s completely objective, “Williams said.

Color guard practices are very important especially in the winter season for state. Practices normally last a couple hour and the girls work hard with few breaks some practices closer to state will last from 6:30-9:30.

“It is a team/family, “senior captain Tina Spears-Penman said.