How self-defense can boost your self confidence

Physical & psychological understanding of ways to protect yourself and different type of strategy/techniques.

How do traumatic experiences work and what do they look like?

It’s dark You’re walking home by yourself. Your phone is at 10 percent battery, and you still have a few blocks to reach your destination. Suddenly you hear footsteps behind. There are millions of thoughts that are going through your head. You keep consoling yourself while your heart is signaling to you something is fishy. What would you do?
According to an article on nsvrc.org/statistics, 81 percent of women and 43 percent of men reported experiencing some form of sexual harassment and/or assault in their lifetime. 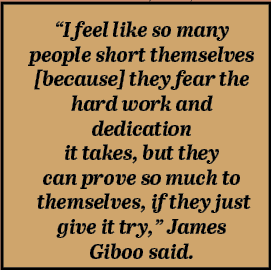 We tend to assume that women have always experienced any kind of abuse or assault. However, men have also gone through this traumatic situation during their life, resulting in lower self-esteem, lack of confidence, and not being able to live life peacefully.” I’ve had men [talk] about they’re feeling venerable.I have a man right now in a ten-week program just by himself. He was bullied a lot as a child and had (some)spousal abuse as a young adult, “staff member of C.O.B.R.A self defense Dave Nelson said.

Speaking about traumatic experiences can be hard for students when they are constantly pressured by high expectations from society as well as the way they were raised.

“The bad guy doesn’t care about your money, your religion, your raisings, he just wants what he wants.” Nelson’s words connect with English Language Development teacher Suzanna Sieren, who said “the traumatic experiences can be part of seeing fights or abuse in your family, or having people bully or hurt you in your classroom, or outside or in your home.”

It can get complicated most of the time because the fear of speaking up is too scary.  For those students who have faced this such experiences.

“When you’re young, you don’t know any better. You think that’s how life is. You don’t see what the other people see. That really affects students, because they have a harder time connecting with people, feeling too open, or letting other people care about them because they are trying to protect themselves,” Sieren said.
What should you carry with you and how to control yourself if you’re having panic/anxiety attack when someone is trying to harm you? 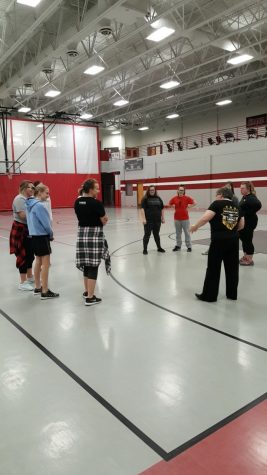 When students are surrounded by family members, friends, and societies that have come from different background/traditions the fear of mental torture gets more suffocating. “When your family has a certain culture that’s different or expects different things, it gets hard because you want to stay connected to your family culture and values, but you also see cool things from the other culture. I think it’s harder for the people living in different cultures, because they are constantly being pushed and pulled back,” Sieren said. 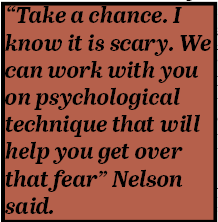 Many students, teachers, coaches, and others have taken a course or have been in a program to boost their confidence. “Each year I had seniors that would come out who would never wrestle before, and they always loved it,” Giboo said.

Attending different types of self-defense programs gives you the power to understand you’re strong enough to handle the situation. “It helps you become mentally stronger because you always have to push your diversity and situation you normally deal with,” Junior Brady Gordon, wresting student said.

An East High School student who is a sophomore shared her experience about how attending karate classes improved her life. “The program I was in for self-defense was Karate. The program includes my life by giving me an opportunity that will help me in the future for self-defense ourselves and it helps me stay healthy by exercising and being more athletic. It will also be helpful in the future when someone is trying to attack you and you could just self-defend. I could use the technique we learn in our karate programs,” sophomore Yojana Rai Said.

Take a deep breath. You have to understand that the past trauma you went through doesn’t make you stupid. It doesn’t define the present you’re living in. Is not too late to stand up for yourself.
“Take a chance. I know it is scary. We can work with you on psychological technique that will help you get over that fear.” Nelson ‘s words add the advice to what Sieren said: “It is important to get that help because if they don’t then it does make school harder and college harder because they don’t have respect for themselves.”

Should self-defense be added on to graduation requirements for high school and college? 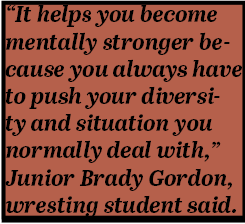 Game plan :“Let the other person attack on what they are attacking,” Katye Yaw said .

Arm hold: “You take your pointy finger and bring it to the outside of your elbow,” Hamann said .

Break knees: “If someone were to grab you and pull you next to them. Don’t fight but instead kick them on their side and it will break their knee and they can’t chase you” Chemistry teacher Hamann Melinda said.